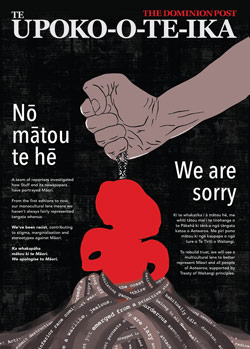 AUCKLAND, Today: Stuff has this morning published the results of an investigation into itself, and issued a public apology for the way the media organisation has portrayed Māori from its first editions to now.

Stuff has today published the results of an investigation into itself, and issued a public apology, for the way the media organisation has portrayed Māori, the indigenous people of Aotearoa New Zealand, from its first editions to now.

The report, Tā Mātou Pono | Our Truth (trans: Elevating the Mana of Aotearoa), led by Pou Tiaki editor Carmen Parahi and editorial director Mark Stevens, shines a light on the way Stuff has been racist in its past and contributed to stigma, marginalisation and stereotypes against Māori.

About 20 Stuff journalists from across the country have worked on the project which has examined all digital and print publications, verticals from business to sport, even Letters to the Editor.

“It’s been very difficult to know the findings of this investigation reflect on me as well, as a reporter and Māori woman,” says Parahi.

“One of the reasons for doing this is so my kids don’t have to carry the pain we, as Māori, have carried for so long because of the way we’ve been portrayed in the media over three centuries.

“Stuff journalists from across NZ worked on the project which examined all digital & print publications, verticals from business to sport, even Letters to the Editor.”

“This day of reckoning is a long time coming and the beginning of better representation in our reporting of all people in Aotearoa New Zealand.”

An editorial by Mark Stevens published today on all Stuff channels includes an apology to Māori and an admission that the monocultural nature of Stuff’s journalism has not served Aotearoa well in the past.

“Our coverage of Māori issues over the last 160 years ranged from racist to blinkered. Seldom was it fair or balanced in terms of representing Māori,” says Stevens.

“We are sorry. But apologies are hollow without a commitment to do better in the future.

“The distance left to travel on our journey includes ongoing consultation and engagement, ensuring our journalism is for all New Zealanders and trying to repair our relationship with Māori.

“That will take time and effort, and from time to time we might stumble. We will, though, continue to hold ourselves to account.”

“Our coverage of Māori issues over the last 160 years ranged from racist to blinkered. Seldom was it fair or balanced.”

Stuff ceo Sinead Boucher says Tā Mātou Pono is one of the most significant investigations the company has undertaken, borne out of the organisation’s new charter which is published alongside Tā Mātou Pono | Our Truth today.

Boucher says the charter is a guardrail document with the Treaty of Waitangi at its core, that sets out principles to guide the business in the future.

“When the ownership of Stuff changed earlier this year we had the chance to reset and reposition the business,” she said.

“Our people advocated for the Treaty principles of partnership, participation and protection to be embedded into our new strategy and I felt strongly they should be widely adopted into the ethics and practice of our business alongside the principles of equity and editorial independence.”

Alongside acknowledging the Treaty principles, and committing to redress wrongs to Māori, the Charter includes a promise to do better in future.

Boucher: “The Stuff charter sets down a pou tiaki (guard post) to ensure we guard against this kind of inequity in our reporting and business practices in the future,” says Boucher. “Our wish is to be a trusted partner for tangata whenua for generations to come.”