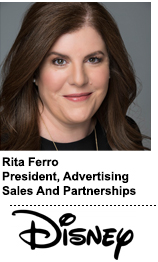 Disney has been at the center of some of the most important recent shakeups in digital media.

Another important change has been Disney’s reorganization from a subsidiary-first model, where media properties like ABC, ESPN and other Disney TV networks operated individual ad business, to a single advertising and technology operation.

“This has been a response to our clients asking us when we would come together into one Disney sales organization,” said Rita Ferro, president of advertising sales and partnerships, who runs that organization.

Ferro spoke with AdExchanger about how the data and advertising capabilities are evolving with the internal re-org and Disney’s other digital media investments, like the launch of the Disney+ ad-free streaming service later this year.

AdExchanger: How is digital growing as a share of overall inventory for you?

RITA FERRO: We made a significant overhaul of our technology stack recently, switching our inventory to Google Ad Manager (GAM). Especially in digital, that’s given us more visibility into the scale and size of our portfolio.

As we started to aggregate across our businesses, we see the scale we compete with is pretty significant. And having that scale and reach drives business.

It’s not that we couldn’t compete before, but since it wasn’t rolled up with one Disney company and technology stack, advertisers couldn’t see the true reach and frequency they were driving. Having that improved visibility into our digital scale has been one of the areas where we’ve benefitted the most from our consolidation.

It reminds me of the consumer transition from desktop to mobile, where a decade ago the audience visibility was poor and now those impressions are getting closer to parity.

I agree. And I think that gap in inventory value will close between OTT or digital video and linear television much faster than the transition between mobile and desktop.

monetizing OTT and digital video campaigns in hybrid ways. Their continued success has helped the industry prove the value of campaigns reaching different screens or of getting on that TV screen in different experiences.

How has Disney’s focus on subscriptions and plan for the ad-free Disney+ impact you?

Disney+ will be the one true ad-free streaming service within Disney, along with the ESPN+, which has ads, and Hulu’s hybrid model.

For us, the subscription adoption is very exciting. The value of having that subscriber base will be immensely valuable to our data and advertising business. When you have strong visibility into device ID, for instance, you can see when that person is in other Disney experiences.

The whole point of moving the advertising and direct-to-consumer business under my boss (Kevin Mayer, chairman of Disney’s direct-to-consumer and international divisions) was that we build out one technology stack, from the live video-streaming infrastructure to programmatic tech, that it grows the overall capabilities to use data.

We are engaged and talking to everyone. There’s valuable technology out there that enables us to do business in new, better ways.

I wouldn’t say “never” to taking on outside inventory. But priority one for us is brand safety. We have a class of advertisers who don’t have to be concerned about that with us.

Would we put our inventory up somewhere else? That’s a harder analysis that would come with stricter guidelines. With the size of our organization today, and considering we’re very well sold, I don’t think there’s any need to put our inventory in another environment unless there’s a specific reason, like a sports marketplace or a programmatic solution that really provided something additive. 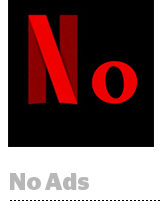 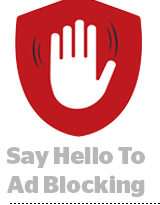 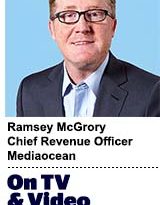 Linear: An Overlooked Opportunity In The Evolving DSP Landscape

November 15, 2018 Programmatic Comments Off on Linear: An Overlooked Opportunity In The Evolving DSP Landscape