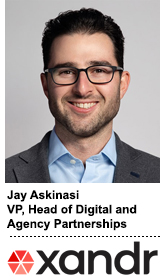 If Xandr wants to live up to its promise and create a programmatic marketplace for the TV industry, it’s going to have to convince agencies to buy what it’s offering.

The AT&T-owned company recently hired Jay Askinasi for the job, and he joined Xandr in early February as VP, head of digital and agency partnerships. Askinasi hails from Publicis Media, where he was global president of investment solutions.

“It’s important for us to service agencies in a way that aligns with the way they’re working,” he said. “We’re setting ourselves up to be easy to use and buy from.”

Part of the challenge will be to navigate agency buying teams, which are still siloed by channel, and working out the kinks around who is in charge of buying connected TV. While some agencies leave that job to programmatic teams, others keep it with traditional TV buyers.

That requires Xandr’s sales team to speak a different language based on the team’s skill sets.

“Making sure the team that can understand what it takes to cut an upfront deal but also an always on, programmatic deal ID is something we spent a lot of time on,” Askinasi said. “We don’t want the ‘Who is holding the budget?’ question to stop people from working with us.”

He spoke with AdExchanger.

AdExchanger: How will Xandr approach working with agencies?

JAY ASKINASI: When I was on the agency side, I thought about which companies were easiest to work with. Who did I not need to call three different people to get answers?

The best way to service our customers is by organizing around agencies and holding companies. We’ll have a national lead for each holding company that will oversee the business and think about client-specific needs within each agency. Underneath those folks will be sellers, both by market and by agency. We have folks that will be dedicated to all of the Xandr products across each agency in a holding company that rolls into an overarching structure.

Are agencies buying from Xandr yet? What’s available now and what’s coming throughout the year?

We’re focused on becoming one of the biggest, most forward-thinking video companies in the industry. We’re the leader in addressable television today across our DirecTV footprint as well as Frontier and Altice. We want to continue to maintain our lead.

We’re also doing a lot in the data-driven linear space on our owned and operated digital video inventory and the AppNexus platform. We’re collaborating with WarnerMedia. There’s been a lot of press recently about enhancing Turner’s product with AT&T first-party data through set-top boxes or mobile handsets. That’s something we kicked off at CES and will continue to grow throughout the year.

What AT&T data is available for buyers to use and how will that expand this year?

That’s something that I can’t speak to specifically. There’s a ton of regulation that we are overwhelmingly sensitive to. We are enhancing inventory and decorating ad impressions with first-party data.

What differentiates Xandr to agencies among competitors in the market?

It’s about distribution, data, content and technology. We have a large foothold on the television screen across our 25 million DirecTV households. Being underpinned by tech, we’re able to do that across best in class, high-quality video.

In my experience on the agency side, the biggest challenge in scaling video campaigns is brand safety. When you think about the power of TV, a 65-inch screen combined with the largest distribution network in the United States, that’s a compelling story.

How will you navigate agency teams and silos? Is there an agency turf war around who owns CTV buying?

We need to make sure we’re covering a large group of people. Most sales organizations have a core constituent within the agency, and that typically is in the national video or programmatic team. For us, it’s crucial to do both. Addressable and advanced television, depending on the agency, sit in different buckets.

We’ve brought people on from ad tech, agencies, video publishers and social businesses. That’s really important to how we talk to the different constituents. Each agency and client have a different point of view. KPIs, trafficking and the way they’re buying can change. That’s why we’re bringing in people with different backgrounds, having both an agency- and geographic-centric model and making sure we have products that can speak to each group.

Who do you work with most?

Right now, the majority of addressable is being transacted through traditional teams. As agencies evolve, their strategies are evolving.

Almost every agency has decentralized their trading desk and put people in traditional buying and planning organizations. When you do that, people with different skill sets come together. People from national video are able to sit with someone from programmatic and optimize that campaign better.

You’re going to see more of that convergence, which is why we’re organizing the way we are.

What is Xandr’s most immediate hope for the addressable market?

We want big brands to invest more into addressable. Only 3% of total national TV investment is addressable.

This interview has been edited and condensed. 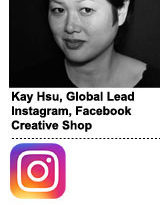 September 25, 2017 Programmatic Comments Off on How Instagram Generates Commercial Value Out Of Creative 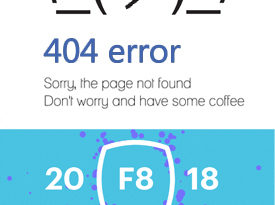 F8: Some Developers Are Frustrated, But Most Are Far From Mutinous

May 2, 2018 Programmatic Comments Off on F8: Some Developers Are Frustrated, But Most Are Far From Mutinous 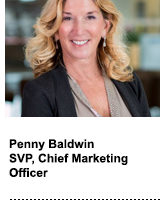 June 11, 2019 Programmatic Comments Off on Qualcomm Keeps Its 5G Marketing Push On Track, Despite External Challenges